Things have been a little crazy around here lately. We are completely back in the swing of school for both boys. Deqlan is learning that 3rd grade means way more work and no more getting away with talking all day in class. The first two weeks were an adjustment for him (and he didn't like it) but he is now used to the new rules and what we are expecting out of him. Fall baseball is winding down. Two more games next week and then we are done :( We have a really great group of kids together this fall and they are 5-2-1 (yes our game Tuesday night ended in a tie because of the time limit)!! Out of the three teams in our town we have the best record and I'm feeling more and more confident each day that Deqlan WILL make select this year!! We will be working with him each and every week between now and select tryouts in January!

CJ still isn't back at work (shoot me)!! He was supposed to have yet another blood patch September 12th. We got a phone call two days before saying they were canceling it to try a new procedure. That procedure was scheduled for last Friday the 20th. We literally spent all day at Duke and then they weren't able to do the procedure because they would have paralyzed him. So now we are waiting to get back in for a blood patch (was supposed to be this week) but the Doctor is waiting to talk to a Doctor from The Mayo Clinic. I've also been in contact with Johns Hopkins about getting a second opinion. Hopefully we hear back from someone soon and maybe someone knows how to fix him!!

Hayden has had a rough few days. He is finally getting old enough to realize that Daddy is sick and can't play as much as he would like. I think he is starting to fear Daddy not being around because when we are home, CJ and I cannot be out of his sight. My sweet boy who normally will go play in his room quietly for hours on end will no longer stay in there by himself. He can't stand to be downstairs if we are upstairs or vice versa. I'm keeping him home from school today to hang (plus Deqlan has early release & those days are crazy carpool days). He also needs some speech therapy (it was recommended in the spring). We should find out today how much insurance will cover (number of appointments, etc.) but the company that did the screenings at his preschool will actually send someone to the preschool to do his therapy eliminating the need for me to drive him to Raleigh for appointments, Thank You Jesus!!!

I have been stressed beyond belief with all that has been going on around here. School is kicking my butt, taking 4 online classes and one was only a 8 week class. My chemistry class is over in two weeks and I am thankful! That class started out horrible but I have my grade up to a 70 and I am happy with that!!! I had a meeting with my adviser on Wednesday to change my major from Associate in Arts (transfer) to Office Administration with a certificate in Legal. Surprisingly I've completed 23 hours. But only 15 transfer to my new major and with adding the certificate I still need 60 hours to graduate! If I continue taking only 12 hours a semester I will graduate in 5 semesters so if I take summer classes I could graduate in Summer 2015. But I don't think I'll be able to take full course loads during the summer so it will probably be December 2015. If I push it and take more hours I could graduate in 4 semesters but until Hayden starts Kindergarten that won't be an option. So there is the potential to graduate a little bit earlier but I want to do well in these classes. I am going to take 5 classes in the spring (all online) but it will only be 13 hours (two classes are only 2 hours each). I took 13 hours fall semester last year (but two were on campus) and am taking 12 now so I should be fine with that.

CJ and I will be having a talk tonight about our plans for his treatment options and what he desires medically. He is no where close to the end of his life but I feel we need to have this talk now before he gets there. He has some depression issues right now (understandably) and I just need to know where he stands.

I hope to be around more after the beginning of October :-)

Last night was Deqlan's first kid-pitch game. He went 0-2. Struck out both times, the first time swinging and the second time looking. It's still an adjustment since they just moved up from coach pitch where they got 6 pitches. Hopefully tonight's game goes better, sad that CJ & I will miss it but at least Grandma can get him there.

Poor Hayden didn't make it through the whole game. He fell asleep in my parents laps about halfway thru the second inning. It was a 7:15 start and we didn't leave the ball field until 9 and it was a 30 minute drive. I don't know what we will do with Hayden when we have 7:45 start times!! Thankfully all of those games are much closer to home.

Hope everyone is having a wonderful week. Deqlan has a teacher workday tomorrow (yep second week of school was only 3 days) but Hayden still has school. It'll be nice to spend some one-on-one time with Deq. I think we are going to head to the bowling center to get some practice in while Hayden is at school.

I've talked many times about being a bowler. It is something I have done for my entire life and for a time this year I seriously wondered if it was something I would be able to do again following my surgery. I'm still in a ton of pain day in and day out, but with a new medication from my surgeon and some motrin every day I am able to function!

Saturday I bowled in a tournament (only the second one since my surgery). It wasn't a huge tournament and it was all women but it was good practice for a tournament coming up in just 3 1/2 weeks. I started out not so hot. I was having a hard time getting lined up and finally decided in the 7th frame of the first game to switch balls and make a huge adjustment. I finished the game with a 160 (26 pins under average) and was disappointed with such a rough game for a tournament that is only three games. Making things more challenging was that we had to move lanes after every game! Thankfully when we moved for the second game my adjustment was still working and I was finally feeling my knee loosen up. I ended the game with seven strikes in a row and shot 238 (highest for that game). I didn't know what place I was in after the first game but I knew that shooting 238 and beating everyone else by almost 40 pins would give me a good chance at getting in the top 4 (top 4 cashed). About three frames into the 3rd game they posted the standings and I was in FIRST!! But only by a few pins. To think that just a few months ago I couldn't bowl at all and the doctor was telling me that it may be something I have to give up and now I'm leading a tournament again made me smile and nothing anyone said or did was going to wipe that smile off of my face!! I was very fortunate to pull out the win!! I finished my third game with a 222 and ended up winning by 22 pins!! 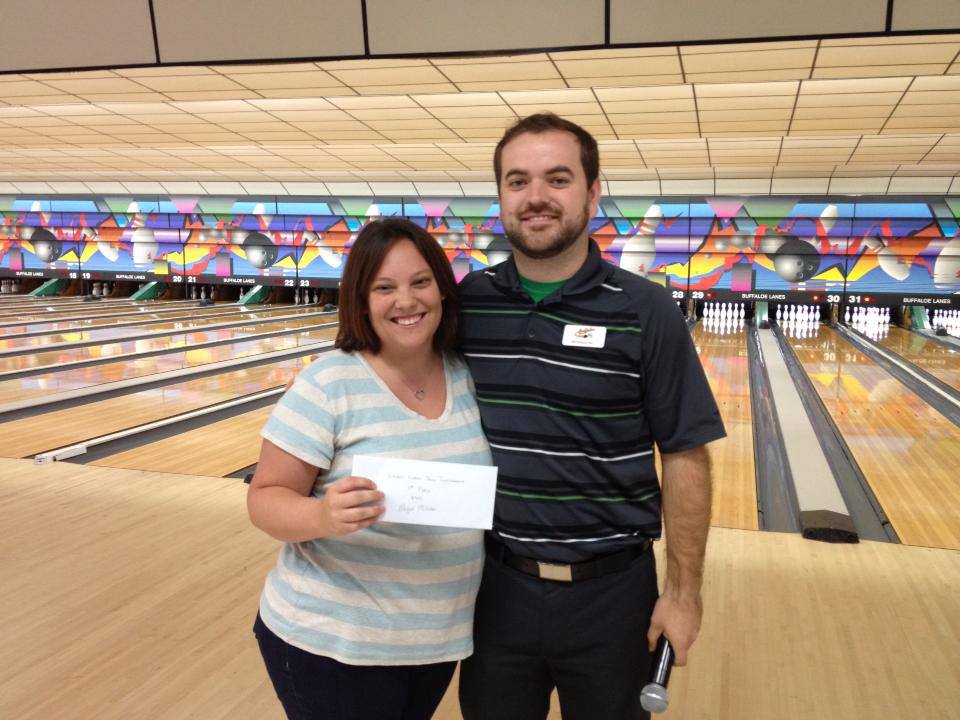 I won $500!!! Since I've been an adult bowler this is the largest amount I have won! The icing on the cake is we just spent $400 on my car on Friday so this paid for it!!

I couldn't be happier with the way the weekend turned out! Now it is time to start practicing to get ready for Queens at the beginning of October!!